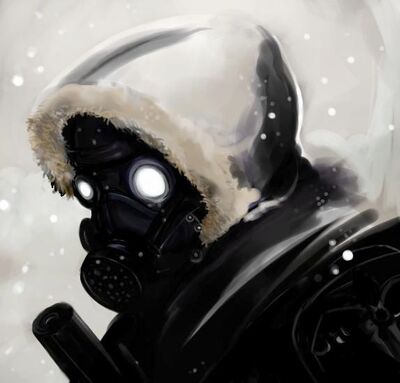 John was born in 1987. His father was a man of the military, Master Sergeant. In 1990, when John was only 3, his father was shipped off to fight in the Gulf War. A year later, the war ended, but John's family would never be the same. After the war, John's mother and father would fight constantly. Finally, in 1992, John's father left his mother, leaving her to raise John alone. Even though John's father left him, he still looked at him as a hero of the army. He wanted to join the military like his father.

In 2006, when John turned 20, he joined the military and went off to boot camp. A year later, he was shipped off to Iraq to fight in the war. There he earned his nickname, "Ghost", which would stick with him for the rest of his life. There he saw the horrors of war up close. It shaped him. It matured him and showed him what the world truely was.

In 2011, he returned home from the war. He didn't know what to do with his life. Soon, he was contacted by S.H.I.E.L.D. who wished to recruit him into their ranks. At first, John declined, but soon, he felt that helping people was the only thing he knew. So he joined and received training for the next year. In 2012, he completed his training, becoming an official S.H.I.E.L.D. agent. He was given the codename "Ghost" and he would continue to serve the people, as an agent of SHIELD and as a masked hero.

John is a rather quiet man, although don't be fooled. He can certainly look out for himself. He joined S.H.I.E.L.D. because he knew he was strong enough to help people. He's rather gruff, strong and silent. And though he seems ruthless, he has honor. The man does hold those close to him dear, but he's too proud to show it.

Community content is available under CC-BY-SA unless otherwise noted.
Advertisement